The “Thank You” Thread 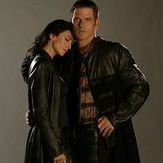 This is a thank you post, but if anyone does have any other comments remember to phrase them in a constructive manner and don't be mean, remember to be polite and that crew are volunteers, they work u

Better late than never.... I flew in from the US specifically because of Christopher Eccleston. I have been a Whovian for over 40 years. It was my first LFCC and first time in the UK. I have now met e

I've realised that I left out my thank you's from my Wround Up thread so I thought I'd add them here. I want to thank the pit boss with the red glasses (I think her name was Mary? Sorry if that's wron