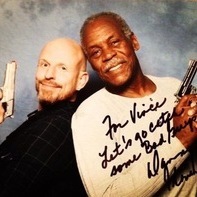 Damn he was the guest I was the more excited about from the start.... Show is still packed, but arrrrghhhh... SM try and bring him back next year and to make up for this you now have to bring Charlie

Your suggestions have been rejected. Lets leave this discussion now hey? Keeping on going on and on about it when the 'suggestion' has been roundly rejected is tantamount to smacking your head into

Very sad. But nice to get the official confirmation. I do hope you can get him back for another event. He's a brilliant guy and a wonderful actor.