"Ok we thought this was not ever going to happen and we just closed it...on Wednesday we have a big guest announcement and it is legendary! This will be something that people will talk about for years 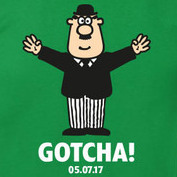 I once confused the two, but I won't get fooled again.