Too good to be true, but now i want also Erika Eleniak... please? 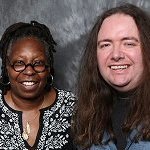 So I'm aware from reading this that there are certain things that Pamela won't sign or doesn't like to sign, Playboys, possibly photos with the Hoff.etc Has there been any mention of VIP related mater